It’s all about culture 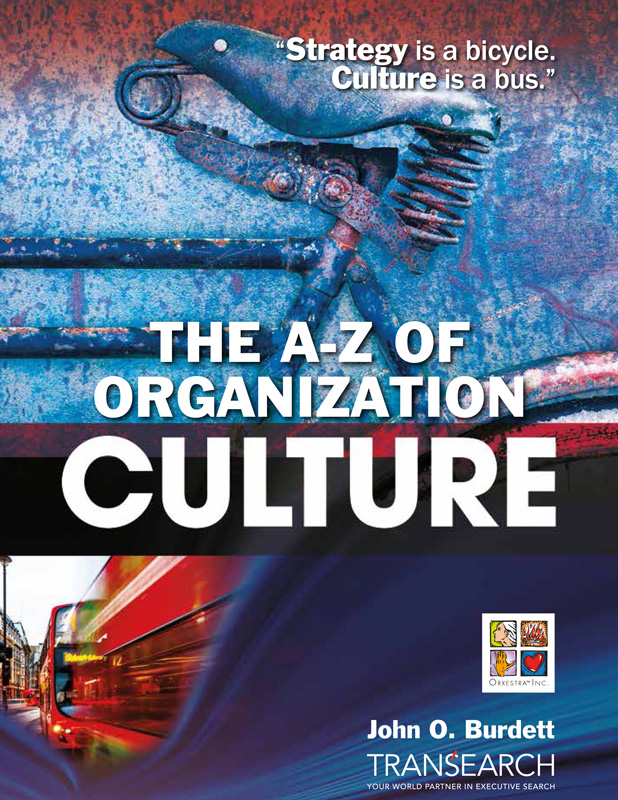 The future ain’t what it used to be. Continued globalisation, wide-scale disruption, uncertainty, exponential change in technology and a new generation joining the workforce are changing how business does business. To compound the challenge, the organisation we created in the last century – a veritable engine of wealth creation – is out of step with the emerging reality.

Tomorrow’s organisation will be fast, flat, focused and built around followership. If how you do business is pretty much the same as it was three years ago, you are already losing ground. If you are not fully invested in tomorrow’s conversation, you are being squeezed out of the game! If you are “dancing” as fast as you can and discover that the competition has stolen a march … it’s fruitless to try harder. You have to change the game!

Traditional management thinking is that strategy drives culture. Figure out the strategy and then make the culture fit. In a steady state world, it’s thinking that makes perfect sense. Except, we don’t live in a safe, predictable environment. In a world of uncertainty the only thing that is predictable is that your strategy will be “subject to correction”.

A scenario approach helps but that only makes the notion that strategy drives culture even less meaningful. Strategy clearly can’t drive multiple cultures. Even with scenario thinking, long after the strategy has shredded, what will endure is the culture. The new reality – culture enables strategy.

Based in Canada, John Burdett’s research and the work of others suggest that only about 20% of organisations manage culture. Organisations put culture on the back burner because of an attitude to change that is best described as “cultural drift”. Cultural drift is the misplaced belief that even if we fail to invest quality time at the top of the house on culture, somehow the secondary initiatives unfolding in the organisation (e.g., six sigma, process improvement, town hall meetings, an emphasis on safety, engagement surveys) will get us where we need to be. Are you managing your culture?

John’s new book, The A-Z Of Organization Culture, is a compelling playbook outlining how to leverage culture for competitive advantage. It draws on his extensive international work on culture with some of the world’s biggest multinationals, mid-size organisations, successful start-ups and not-for-profits.

Look for … how to have the “culture conversation”; breakthrough learning strategies; why your culture is your brand; working at the level of mindset; “re-engaging the middle kingdom”; and measuring culture. The latter will enable you to, literally, chart the
“roots” (where you are today) and “wings” (where you need to be) of culture in your organisation. If you don’t measure it, you can’t manage it!

Accessible and wonderfully illustrated, The A-Z Of Organization Culture is a unique “road map” that will enable you to make tomorrow’s culture come alive in your organisation, today.

An advisor to TRANSEARCH globally, we are delighted to say we are bringing John out to Australia in late March. We will also be launching his new book at that time.

Read more about the theme of John’s visit: If you’re not managing your culture, someone else is

This article was originally published on TRANSEARCH Executive Leadership Insights.

Posted in The world @work

Ignore this at your peril!

Exactly 12 months ago I was diagnosed with cancer.

There were a couple of jaw-dropping news items last year, but personally being told you’ve got cancer would be right up there. I’ll spare you the details, suffice to say after a routine colonoscopy, I ended up with six weeks of chemotherapy and radiotherapy. Not much fun, I can assure you!

I prided myself on being fit, eating healthy and generally looking after my well-being. Nevertheless, I had cancer. I did have many Why me? moments, but my doctors assured me cancer doesn’t discriminate. It can happen to anyone… Reluctantly, I took that on board and got on with my treatment. Yuck.

There were the side effects: nausea, a strange metal taste in my mouth, fatigue, nerves, hair loss (a free Brazilian), discomfort sitting, pain around the pelvis and bottom.

Twice in a lifetime is more than enough, so hopefully my turn is done, but I thought it timely to share some learnings from my experience with cancer to encourage you all to get a medical check-up.

Even if you’re already made your resolutions, promise yourself and me that you’ll kick off the year with a medical check-up. Do something. Book it in now.

How have you worked through challenging personal circumstances? What did you learn from the experience?

This summer I heard a great story from Davor Miskulin, a Slade Group ‘alumni’ now working with Burning Glass in Canada, but who visits us regularly when he’s in Australia.

At a Toronto saxophone masterclass last year, which Davor attended with his sax-playing daughter Iva Mari, David Liebman told the story about jamming with Miles Davis. It was many years ago when Miles was already the complete legend and David was building his reputation. As anyone who has followed Miles Davis knows, he was a man of few words.

As Liebman told the master class, he mulled over that line for years, thinking about how it applied to his music. Davor and I mulled over those four words during a lunch before Christmas, and considered all the different ways that phrase applies to work and life.

It’s knowing when to quit. Knowing that you’ve given it your best, but leaving ‘them’ wanting more, not less. And leaving yourself room to do other things too.

How many of us are tempted to go on and on – beyond the moment when we should quit? Our speeches, our board tenure, the emails we write, the presentations and reports we present, the…?

When have you wished you’d finished before you were done?

Tagged with: achieving goals, David Liebman, Geoff Slade, know when to quit, Miles Davis, quit while you're ahead, retirement, Slade Group, Slade Report
Posted in The world @work
In Archive